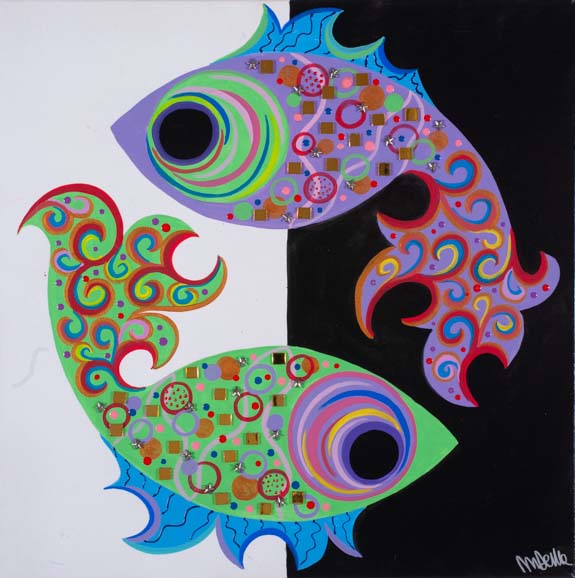 When it was suggested that she tackle the theme of “Tao”, Monica De Mattei embraced it and made it her own. Reproducing it in several versions, she has brought to life a new collection which highlights many personal traits of her poetics. While the Taoist world is characterised exclusively by two forces: white (Yang) and black (Yin), as always, Monica’s vision is expressed by a predominant use of colour. The symbolism of Tao originates from ancient Chinese philosophy, probably from the observation of the transition from day to night and vice versa. According to this principle, the opposite and complementary movement of the spiritual energies Yin and Yang enables all forms of life and constitute the way in which reality is expressed. These opposing forces are also referred to as “the two fish”, because the couple of rotating spirals which form the symbolic Tao circle actually looks like two fishes entwined in mutually permeating and equal sections. The originality of Monica’s artistic expression of this theme consists of eliminating the typical curve of the line which separates black from white, with the superimposition of a couple of her very own colourful fish. The traditional permeation of the dual full-void Tao universe is no longer conveyed by white which enters black and vice versa, but by all colours which, in a movement of uninterrupted rotation, continue to fill and empty both energies that make up the infinite background. The search for a harmony of forms and colours which leads to the final composition actually recomposes the spiritual balance which according to eastern philosophy, characterises the entire cosmos.